My eclipse photos and videos should be growing over the coming weeks. If you'd like an email when I make an update, drop me a note at madraseclipse@jeffstravels.net.

On August 21, 2017 the US experienced its first total solar eclipse since 1979. Due to its statistics for clear skies, Madras Oregon was chosen by many (including NASA) as their viewing point, swelling a small town with a population of a bit over 6,000 to well over 100,000 for the eclipse. Thankfully many farmers opened their fields to rent spaces for visitors, providing many a place to stay, as the "normal" places to stay were booked months (if not years) in advance. I stayed at a farm a little NE of Madras, about a mile north of the centerline of the eclipse.

Following are photos I was able to take using long telephoto lenses (not telescopes) and a couple of equatorial mounts. This was my first total solar eclipse, and I can tell you that totality is nothing like a partial eclipse. To the human eye, you see a black hole (the moon) in the sky with white light emanating around it. But the camera can see things the eye can't, including some red and pink around the edges.

If you would like to see a video including some of these images as well as time lapse before and after totality, check out this video: https://vimeo.com/236179346

If you were at the event and would like to see some other photos from the weekend (not of the eclipse itself), feel free to check out the images here: http://www.jeffstravels.net/Trips/Northwest/2017-Madras-Eclipse-Trip

A note on color: The light from the sun is actually white during most of the day. (That's why a white object looks white in the sun.) However, people are used to seeing the sun near the horizon look red-orange, and most solar filters/glasses provide a similar red-orange tint. As a result, the pictures taken of the sun outside of totality with a solar filter will give a red-orange tint to the sun. The pictures during totality (taken without any filters) will have white light.
Read More 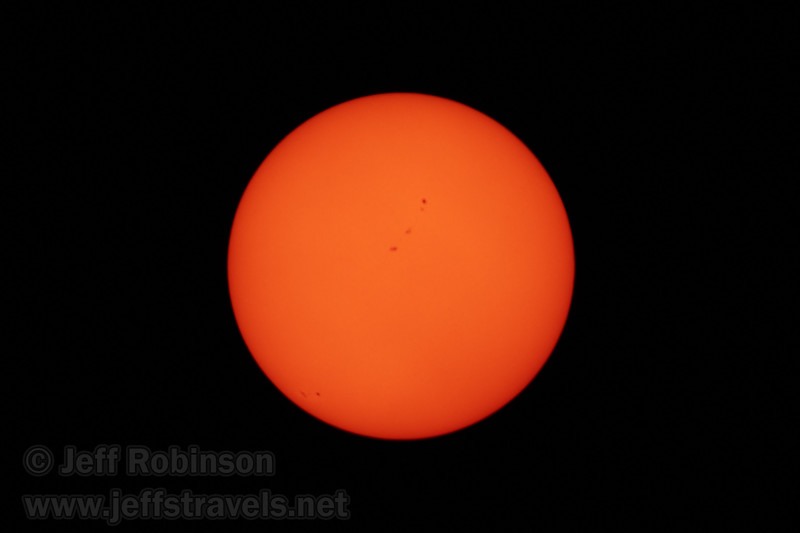